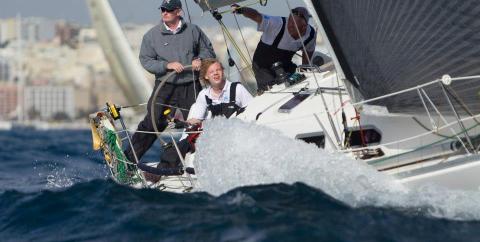 Wow what a race, over 6 days offshore racing around the most beautiful race course in the world, passing active volcanoes, being chased by tornadoes, blinded by lightening and enduring complete calm, absolutely unbelievable. We had a brand new crew onboard Seawolf who met for the first time in Malta, each person bringing differant sailing skills and personallities to the team, after the training week I new the crew dynamics were such that we would have great fun onboard during the race, as well as the fun the coastal race gave us a promising result of 4th place behind a local Maltese yacht Ton Ton and 2 of the most respected Skippers and teams from the Uk, Lancelot II and Quokka 8, formidable to say the least, our other Atlantic Charters entry Little Emily sailed in a close 5th place.

The start of the Middle Sea Race was not without incident, both Seawolf and Lancelot were called back for being to early away, this soon behind us we quickly got back into the race and the 4 hour watch systems, we crept through the fleet and once round Stromboli found out selves in the top 3 in class, what better news could we have to keep trimming and wriggling along in the light winds by day and by night, with good food, good humour, super light weight UK Halsey sails and the most impressively accurate B and G instruments Seawolf seemed unstoppable. Then the unthinkable happened, at 4 am in the morning the battery voltage had dropped to 10.5 volts so I called to Matt our youngest crew member at only 18, to switch on the engine battery, I will never forget his voice saying “it’s already on Dave”. My heart sank as I turned the engine key to here the faint click and nothing more…our race was over.

Frantically we tried a few crazy ideas, spinning the alternator by hand, connecting each battery individually etc etc, then with day break we came up with the master plan, give the batterys time to naturally recover, warm them up with hot wet towels to generate some life, loosen an injector to lower compression…So at 1200 we had the one last attempt to start the engine, as the key was turned a squirt of wd40 was sent in to the inlet for good measure and against all odds she burst back into life, phew! we were racing again.

We approached Pantelaria in a howling squall yet the whole crew were full of renewed enthusiasm and determination to take as much speed from the wild winds as possible, enabling us to gain a place now 2nd in class, incredible at one point we were so close to Little Emily we could chat and laugh about the madness of the race so far. With a team now having the bit firmly between their teeth we held on to, lost and recovered this place over the next 48 flukey hours to finish the 33rd Rolex Middle Sea Race 2nd in class and 14th overall, victory in class 4 going to the excellent Maltese team onboard Artie J122 and Little Emily taking 3rd place on the podium well done guys. A big thank you to all the crew of Seawolf and to Ibex Insurance Services of Gibraltar for continued sponsorship and support in 2012.