The 13th Gibraltar Regatta was held on the 25th/26th July by the Royal Gibraltar Yacht Club. 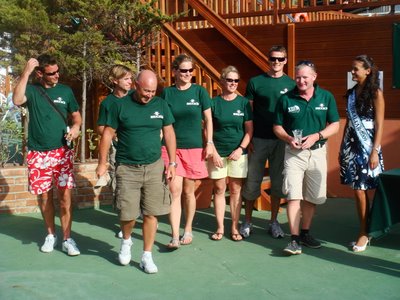 Racing took place over 2 days in the Bay of Gibraltar.
Light airs made for some interesting sailing on the Saturday, when the fleet were sent around the rock to the Aero bouy on the East side and back.
Trumpeter of the Rock took line honours followed by Seawolf and the superbly sailed Vikingo in Third , the corrected results gave victory to Vikingo, Seawolf Second and Trumpeter third.
Sunday again saw light airs:
2 windward leeward courses were set and sailed by the fleet, sailing gains and losses were seen all day as the light airs came and went, leaving wind holes all around. The boats that managed to keep sailing throughout, were rewarded with very close racing at the front of the fleet.
After all the results were in the final standings were:
First Vikingo 6.5 points
Second Trumpeter 6.5 points
Third Seawolf 8.0 points
Well done again to the new novice crew who trained with us and sailed on board Seawolf.