The 2015 Giraglia Rolex Cup, proved to be another challenging year of close competitive sailing on the French and Italian Riviera. Seawolf had an International crew consisting of, 3 Romanian, 3 English, 1 Spanish, 1 German and 2 Swedish sailors of mixed ability.

The first race was the famous coastal feeder race starting at midnight from San Remo Yacht Club following the coast for 60 miles to the finish at St Tropez. Seawolf made a good start at the South end of the line amid a fleet of 75 yachts ranging in size from the awesome 100ft super maxi Esimut Europe to the 30 ft club racers.

The night gave us varying conditions including A sail reaches, light wind beats and tactical calls to go in shore then out. Upon arrival at St Tropez on Saturday morning our final position was confirmed as 8th place, not bad for a new crew, led by top helmsman Sergio Llorca. 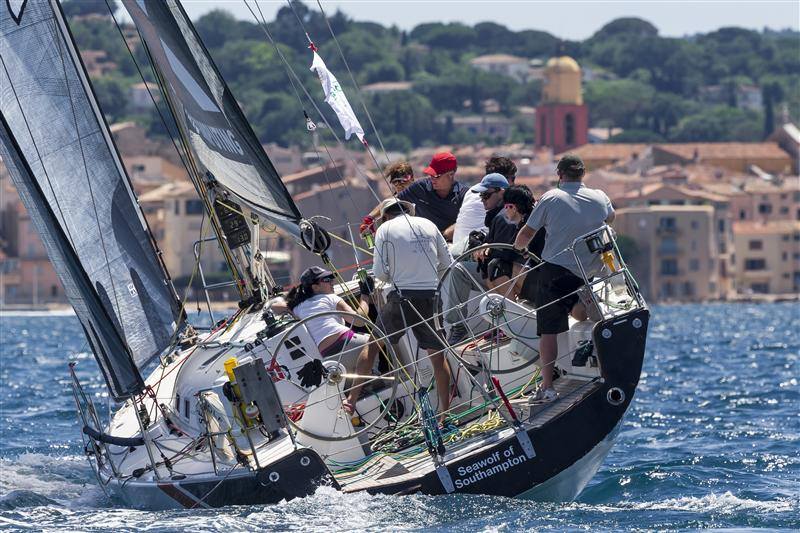 During the following 3 days in St Tropez the 3 inshore races were set, day one and two we secured second place in each race then on the final race the wind died at the finish allowing the fleet to close in and reduce our lead to leave us in 11th place, giving a final placing of 3rd in class in IRC class B for the inshore combined result.

The final race was the famous race from St Tropez to the Giraglia  island, just North of Corsica, then on to the finish in Genoa. After a good start and first few hours in good breeze we were pleased to be amongst the leaders of our class as night time came and the wind died the game of sailing chess began, with red, green and white      lights appearing and disappearing in the night. Day break came still with light airs which frustrating held out all day until we reached the Giraglia at night fall, once around fresh breeze picked us up and gave us a perfect course at 7 knots plus towards Genoa, this breeze again died when we were in sight of land giving a frustrating end to the offshore race at approx 10pm on Friday.

A disappointing result of 68th place proved our chess skills in the light winds were not so good, however with the many retirements amongst the small boats we were pleased to find out we finished 11th in the combined race fleet, resulting in a final result of 4th place overall after the 5 races in the regatta were combined. All in all a great result and fantastic experience.