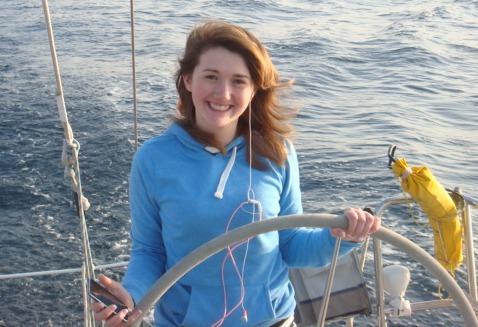 Last day already of a very short and eventful trip sailing through the med  with a group of the most diverse people I could imagine travelling with; its been  a trip full of serious banter, lots of alcohol and a lot of motor sailing.

I only knew I was going to be coming sailing about 4 days in advance and therefore did not do all the sailing revision I should have done, seeing as I haven’t been in YEARS, however it has been fine and everyone is more than willing to help out if I’m stuck or don’t understand how to do something (which is a lot.) whilst Horatio and Tweedledum were showing off tying bowline knots one handily I was still reading up on how to do one and failing miserably until shown. They have all taught me something in one way or another;

I can now write a ‘log’ in the book, take a fix, helm on course and most of all get some seriously thick skin…

Being the only girl after Tracey left was something I was seriously dreading, and rightly so, as the only person who doesn’t seem to snore is Dave, and he gets a cabin to himself. The guiltiest parties being Tweedledee and Tweedledum, especially after a few drinks where I have discovered that themselves and Dave seem to immature about 30 years, Ed dances like a 70s pop star on pills and John just sleeps.

What a party boat.

Best part of the trip has defiantly been the dolphins swimming next to the boat and up by the bow of the boat; which for me was incredible as I had only seen dolphins from a distance before, and to see them so close up on my second day was something I won’t forget.

The worst part would have to be the getting up at stupid o clock for night watches, which can be such a pain, but when the sky is lit up with stars and the dolphins are making ghostly streams of white in the water alongside then it all seems worth it.

On my first night watch, Dad and I learnt how to pass the time effectively by playing several word games which, to my delight, has come to seriously annoy some of the others on the boat. Night watches mean that I have been taught several constellations by Ed and Dave, seen a setting red moon (again, something that I wont forget) and taught about north and south cardinals.

Overall, an extremely enjoyable trip, with a brilliant group of people, who are mercilessly teasing and ribbing but I wouldn’t change anything.