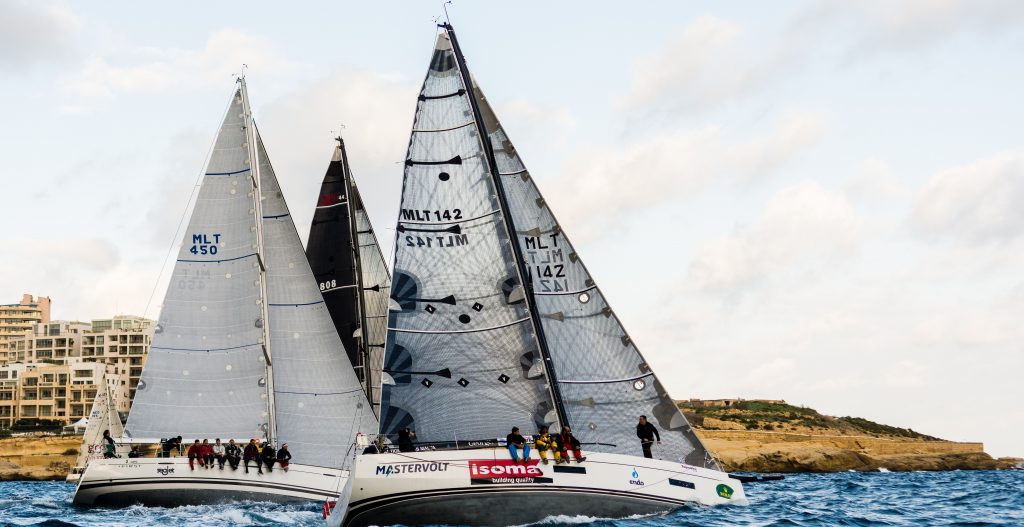 On Tuesday the 13th of December the annual around Malta yacht race took place under the instructions of the Royal Malta Yacht Club and generously sponsored by marine electronics supplier Medcomms of Malta. A strong fleet of 19 yachts started at 0830 on a clockwise circumnavigational race of the island in a fresh North easterly breeze, starting and finishing in the entrance of  Marsamxett harbour.

The fleet soon spread out with the class one boats of Unica, Elusive and the two XP44s commanding the lead, in class 2 Seawolf took an early lead and was the first in class around the only mark of the course off Munxar rock. The cat and mouse game continued in the tricky winds and the lee of the cliffs on the west side of Malta until clearer breeze arrived through the Comino channel. Once back on the East side of the island a sprint to the finish in steady breeze greeted the whole fleet.

With a finishing time around 1400 to 1500 all crews were able to take a well earned drink in the RMYC bar.

A great days racing was had by all, especially on Seawolf , managing to hold on to first place in class 2 with a new crew of friends who had just completed 2 days training for this event, congratulations to all on board.

A few comments from the Seawolf crew aswell:

The first time Seawolf has raced in this event and for sure it will now be on the calendar for us every year, great course, superb conditions and crew of happy people, what better way to spend a Bank Holiday Tuesday in December? Dave Seawolf Skipper

“Racing on Seawolf in the Round Malta Yacht Race offered
crewmembers of all abilities the opportunity to participate in a unique and special adventure. Made all the more appealing by the fantastic support from the RMYC.”Louise Seawolf crew

“Sailing around Malta was an exhilarating and exciting experience. Crossing the finish line on board Seawolf, ahead of other yachts of its class, and winning made the RMYCR and adventure like no other.”Louise Seawolf crew

“Whether you are an experienced or novice sailor the Round Malta Yacht Race is for you, for everyone, its a scintillating, inclusive race for everyone. Made all the more exciting as everyone can win.” Louise Seawolf crew

First race I’ve ever done and besides nearly going for a swim it was the best day ever. if you have never been in a race put it on your bucket list : John Marsh, Seawolf crew

My sailing ambitions never included Yacht Racing, but after Dayskipper training on Seawolf, in the expert hands of Dave Latham I couldn´t resist the challenge and am thrilled that we came 1st in our class! Marilyn Napaul

If you are looking to join us for a similar adventure in Malta in 2017 please check out our Marzamemi regatta from Malta to Sicily and back!