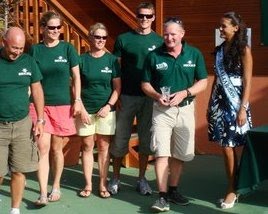 Pictured above Kaiane presented the sailing team of Seawolf with there trophy in this years Gibraltar regatta, she has now been crowned Miss World 2009, everybody at Atlantic Charters send there congratulations and best wishes for the year ahead and look forward to welcoming her back to Gibraltar. Hopefully Kaiane will again be at the Gibraltar regatta 2010, where we will be competing against the top Gibraltan and Spanish sailing yachts.