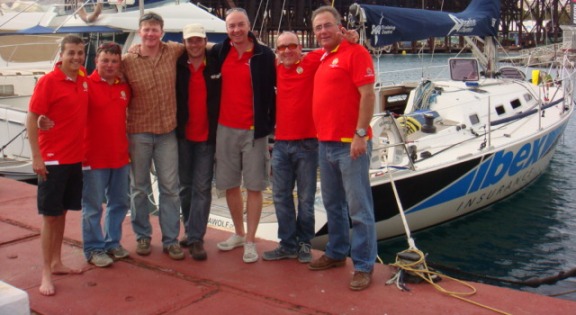 The 4th Regata Ruta del Coral took place over the 30th April to 1st may 2011, hosted by Club de Mar Almeria, the route was from Almeria bay along the coast west to a bouy then south to the Isle of Alboran then back to Almeria port, a total distance of 122 miles. Seawolf and her crew had a great start and led the race throughout, rounding the first mark with a 20 minute lead on the fleet of 12 yachts. As the night closed in the wind died and light airs tactics kicked in, after several slow hours we rounded the Island still with a 17 minute lead. We then took a rhum line route back to the finish. Arriving home just after 1pm on Sunday with the following yachts 30 minutes behind we new the results would be close.. To our disappointment we missed first place by only 40 seconds of corrected time, victory going to Peneque a local Beneteau 36.7.

Overall a great effort by all the crew on Seawolf who put 100% effort in to the whole race with winds ranging from 0 to 30+ knots, it was a great taster of offshore racing for some of the crew who had never raced out of site of land before. It was also a great offshore shakedown for our next offshore yacht race the Giraglia Rolex Cup, from St Tropez to Genoa, we still have a few  crew spaces available for this classic race plus mile building opportunities from Gibraltar to St Tropez. Full details at www.atlanticcharters.co.uk