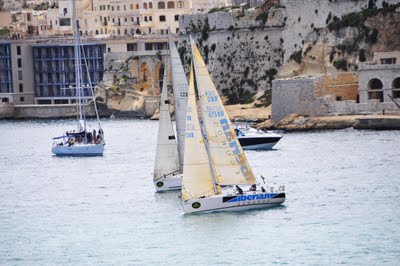 After a magnificent start in Grand Harbour Valletta, Seawolf and her crew worked hard for 600+ miles, battling electrical storms, erupting volcanoes, gale force winds and equally matched competition. After loosing 2 spinnakers on the first night our lead dropped to third place and finally to fifth place in class and an unbelievable 13th place overall in a fleet of 77 thoroughbred yachts, we managed to beat all the faster class 2 and class 3 yachts, a truly amazing effort by all on board.
An insite into the race is one of Phillipe Falle’s many blogs:
Dodging squalls, volcanoes and swarms of giant jellyfish!Last night was magnificant if not a touch nerve wracking! On one side of Seawolf we witnessed a sensational electric storm which illuminated the sky and silhouetted the volcanoes. On the other side of us was an erupting volcano and we were treated to a wonderful display of lava been strewn from the summit which towered high in the sky. What an amazing light show of deep oranges, reds and white which dramatically lit the skies around us. The phospherence lit the stern wave of Seawolf as we power reached accross the Mediterannean at 8knots. It was an eerie couple of hours but a spectacle I would not wanted to have missed. It was like something out of a sci-fi movie set, only better and more real than even the most sophisticated home cinema could portray.
The biggest challenge for us has been how to cope with the relentless squalls that have been battering us for the last two days. Too much sail area and there could be severe damage, too little and we are way underpowered between the squalls. The other choice is continual sail changes which are just about completed before the conditions change again and will exhaust an already tired crew! What to do? Hopefully we have now passed through the last one for the next 24 hours! But don’t hold me to that!
For now we are enjoying the breathtaking scenery of the North West tip of Sicilia. It is a largely uninhabited part of the island which has blown my mind with its rugged and awe inspiring beauty.
My mind is now back on the swarms of giant jellyfish that have regularly engulfed us. They are not called dustbin lid jellyfish for nothing! Those of you who know of my fear of these pointless and disgusting creatures will understand and probably be at home laughing!
Ps my feet are still wet and are now going wrinkly!
posted by Philippe Falle

Last night was another amazing night. Not only did we improve our position we had a stunning display from the mediterannean dolphins in the pitch black moonless night. They were enigmaticly illuminated by the phospherence as we were becalmed and creeping along at 2 knots. Some of the time all we could see were the torpedo like streaks below the surface as there trail was brilliantly lit. Sometimes they would slow down and swim alongside us, belly up, showing off their supremecyof the sea. What a wonderful and unexpected display.
Today we should get sunshine, lots of wind and over 20 degrees ofheat. Finally the shorts can come out and we can experience what this race is meant to be about!
Anyone who wants to do a serious offshore race with a difference thisone is a must. The diversity, rapidly changing conditions and stunning scenery make this one to remember. I now know why this is one of the ‘classics.’
For now though, please be rest assured we are fighting hard all the way. I have just heard we are in 3rd place now and a race win is firmly in our sights!
Superb. Please contact us soon if you want to be apart of our 2010 Rolex Middle Sea Race crew, as we intend to be back to WIN….