The 38th regatta of the oldest, most famous yacht race in Spanish history took place on the last weekend of May 2015. Hosted by El Candado yacht club, Malaga.

The fleet of 21 yachts set off to the Isle of Alboran at 1200 heading into a moderate south westerly breeze. At the first gate several yachts peeled off to complete the shorter coastal course leaving the bigger boats, lead by Seawolf at this point, to continue South East to the island. With a Code Zero set Seawolf lengthened her lead and claimed the first prize of first yacht through the check point south of the island in less than 12 hours. 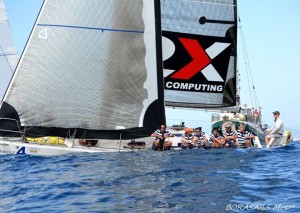 Into the night the wind increased providing exhilarating sailing again with the Code Zero set under a bright, clear, moonlit sky. Once the morning arrived as usual everything changed, the wind dropped and the game of glassy sea chess commenced.

After a frustrating hour with no breeze Seawolf gybed inshore and found wind close to the land, with delicate teamwork and total concentration the finish line was crossed late in the afternoon. The next yacht, Intrepido, finished some 2 hours later as other yachts retired, giving overall victory to Seawolf and her fantastic crew.