The 2015 Sotogrande regatta treated all the competitors to 2 days of competitive sailing in a fresh westerly breeze. Day one saw a coastal race set from Sotogrande to the location of the old aero buoy off the East side of Gibraltar and back. With number 3 headsails and code zeros being set in 20 knots of average wind this proved to be a fast and slightly controversial race..as the windward mark drifted considerably from its original location!! Seawolf stormed in to take second place, beaten only by a smaller boat that was out of sight.

Day two comprised 3 very short legged windward leeward races, the first of 3 laps and the second two of two laps. With three differant winners in each race the results were going to be close, thankfully with 1 discard a first place, second place and third place it was enough for Seawolf to clinch victory with a 2 point margin. Well done to the great crew onboard who gave 100% to pull this result off. 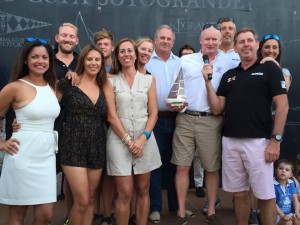